Arch of the Sergeius (Pula) 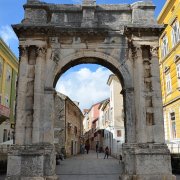 Arch of the Sergii is an Ancient Roman triumphal arch located in Pula, Croatia. The arch commemorates three brothers of the Sergii family, specifically Lucius Sergius Lepidus, a tribune serving in the twenty-ninth legion that participated in the Battle of Actium and disbanded in 27 BC . The arch stood behind the original naval gate of the early Roman colony. The honorary triumphal arch, originally a city gate, was erected as a symbol of the victory at Actium. It was paid for by the wife of Lepidus, Salvia Postuma Sergia, sister of the three brothers. Both of their names are carved in the stone along with Lucius Sergius and Gaius Sergius, the honoree's father and uncle respectively. In its original form, statues of the two elders flanked Lepidus on both sides on the top of the arch. On either side of the inscription, a frieze depicts cupids, garlands and bucrania. This small arch with pairs of crenelated Corinthian columns and winged victories in the spandrels, was built on the facade of a gate (Porta Aurea) in the walls, so the part, visible from the town-side, was decorated. The decoration is late hellenistic, with major Asia Minor influences. The low relief on the frieze represents a scene with a war chariot drawn by horses. 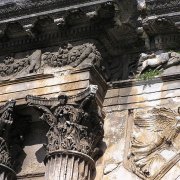 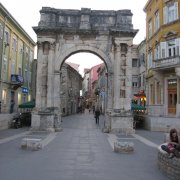 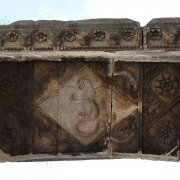 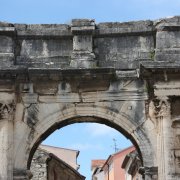 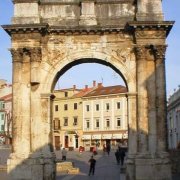 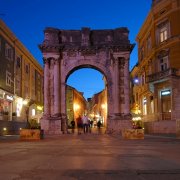 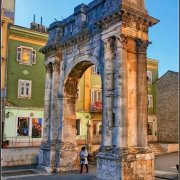 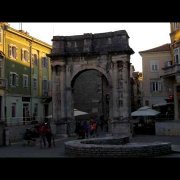 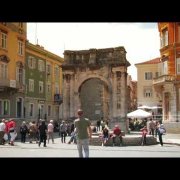 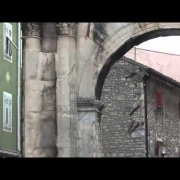 The Arch of Triumph is well preserved and very admirable. It looks perfectly intact in all its glory. During the day it is very crowded with tourists, and during night its lights make the atmosphere even more impressive. In the surrounding area there are many bars, shops and restaurants. You can go through this arch and start your shopping in Pula.

You can't miss it. It is only 10 minutes away from the Amphitheater. You can walk under it and take pictures. The arch of Sergius was erected by a wealthy widow to commemorate the role played by her husband and brothers at the Battle of Actium, where a fleet commanded by Octavian (later Emperor Augustus) was victorious over Mark Anthony. It shows eagles, sphinxes, dolphins , leaves grapes, chariots and the Roman goddess of victory inscribed in honour of Lucius Sergius Lepidus.