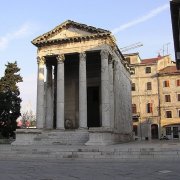 The Temple of Augustus is a Roman temple in the city of Pula. It was built when emperor August was in power (1st decade of the 1st century), and is a very important example of temple architecture. The Temple was dedicated to the divinity of emperor August and to goddess Roma, the personification of the city of Rome. It is located in the Forum, which was the center of public life in every city of an ancient Roman Empire. Today, the Forum is the main square in the city of Pula. The Temple of Augustus has very rich decorations. On the architrave under the top, there is a decorative relief which shows motifs of fruit, birds, vine and acanthus. On the facade, there is a bronze inscription in latin which says: "Romae et Augusto Caesari Divi F Patri Patriae" which means "Roma and Augustus Caesar, son of the deity, father of the fatherland". During the years, the function of the temple changed from a church to a granary, and later, to a museum for stone monuments. In 1944, in World War II, the temple was hit by a bomb and completely destroyed. In the next five years, it was reconstructed and today, it is used as a chest for ancient stone and bronze sculptures. 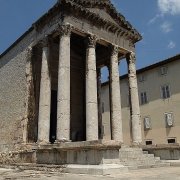 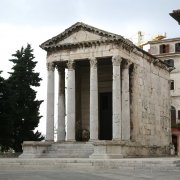 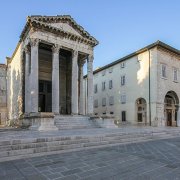 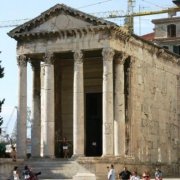 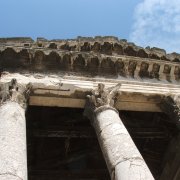 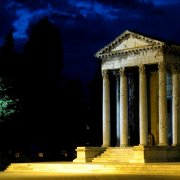 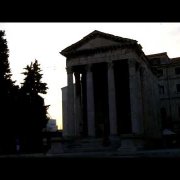 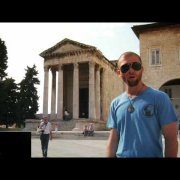 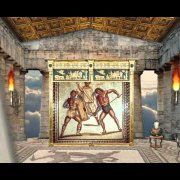 The heart of the Forum

The temple is in the centre of Pula, on the forum. It is very attractive from the outside. The columns at the front of the building are amazing. I peeked inside to determine whether or not it was worth paying the admission fee. The small interior didn't seem to have much to offer. But the outside is worth spending time for a few photos.