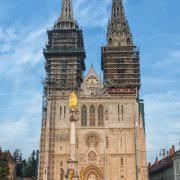 The Cathedral is the most monumental Croatian sacral building, built in the neo-gothic style. Its exterior is 77 meters long and 48.20 wide. The height of the towers is 108 meters. The interior area is 1617 m2 and can accommodate 5000 people. The Cathedral is within a medieval fort. The western part has been demolished so the Cathedral has Kaptol Square stretching in front of it. The south and east sides hold the Archbishop’s Court, while the north side has the remains of the fort, well preserved towers and walls. Priceless treasure is kept in the Cathedral’s treasury, including items dating back to the 11th to 19th centuries. This is also the burial place for important Croatian heroes and martyrs. The locals are especially proud of the fact that in 1994, during the celebration of the 900th anniversary of the Zagreb Archbishopric, Pope John Paul II conducted the holy mass at the Cathedral. 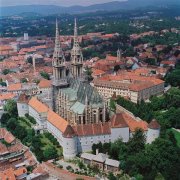 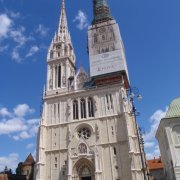 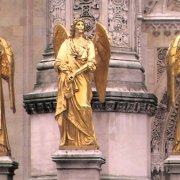 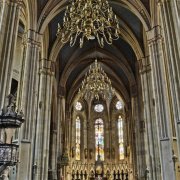 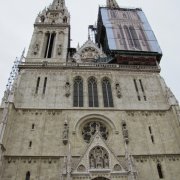 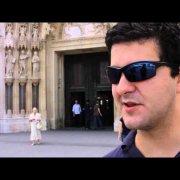 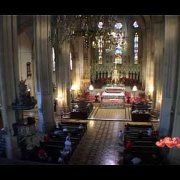 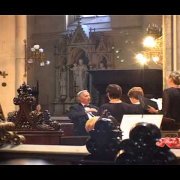 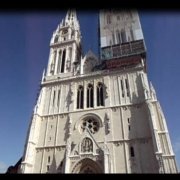 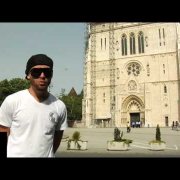 This cathedral has a beautiful and elegant facade which is being carefully restored. It is a very impressive building. The interior is relatively simple compared with many other similar cathedrals but has a wonderful sense of peace. When I visited, it was fairly busy but there were few tourists. It was good to see the cathedral being used for devotion rather than as a museum tourists.

When in Zagreb, you have to stop into the church. You can freely walk through the church and take pictures, (including behind the alter, which is rare for most churches). A wall is covered in Old Croatian words, (above the crosses). It is a beautiful area and I spent hours taking pictures inside and outside the church.