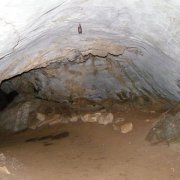 Romuald's Cave is a famous cave as it was the home to a local Saint, and it is the youngest show cave of Istria. But it has been a popular cave since the Palaeoloithic era, which is documented by numerous human remains found inside the cave. There are three meters of sediments, where fire places, flint and bone tools, human bones and various animal bones were found. The most important findings were stone tools from the Upper Palaeoloithic.
The cave is connected with the live of Saint Romuald (950-1027), who lived in the area between 1002 and 1005. First he founded a monastery above the fjord on the plateau. Then he decided to live as an hermit in a cave, and moved to a small cave below the monastery. But when he leaned that many people visited him in his cave he decided to look for a more remote cave, which was this one named after him. After a few years he left the cave in 1005 an returned to Italy. But his cave had become a symbol and a sort of pilgrimage destination. As a result the cave was plundered and various times tomb raiders got into the cave. 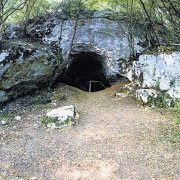